- August 19, 2019
Our coverage of 1982 continues with a look at the week ending August 22nd: DiBiase takes on all comers, who came in from Southwest to try and collect a bounty on JYD?, Tim Horner and Tony Anthony debut & more! 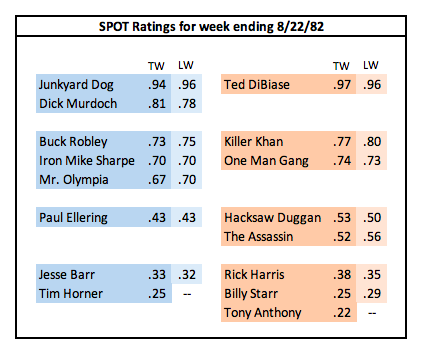 Notes/Analysis: Looking at the SPOT ratings, there's not a lot of changes in the upper portions of the cards. However, there is definitely more variety in the matches. Whereas JYD and DiBiase faced each other quite a bit in the weeks immediately following DiBiase's turn, he now finds himself facing all comers at the top of the card. This week, he took on Buck Robley twice, once in a steel cage match in New Orleans and once in Alexandria. He also defended the North American title against JYD in Monroe and teamed with Hacksaw Duggan to face JYD & Mr Olympia in Loranger.

The Greenwood card was headlined by Mr. Olympia facing Killer Khan, as well as a match between Iron Mike Sharpe and One Man Gang where if Sharpe won he would get 5 minutes with Scandor Akbar. DiBiase, JYD, Murdoch and Duggan were not advertised on the card, making it a much weaker card than the rest of the week. I'm not sure if any of them were booked elsewhere or if Mid-South ran a second show that night with a split crew (which would have been tough but not impossible based on who else was available).

The Greenwood card also advertised King Cobra, who was not booked on any of the other cards during the week. Cobra seems to be a regular in Memphis around this time and I don't have results for this card, so can't confirm if he appeared or not. Another non-regular, Killer Brooks, had a couple of bookings here this week. He faced JYD in a bounty match in Alexandria and took on Robley in Monroe. Brooks was a regular in Southwest at the time, but came in for a three show swing that would also see him booked on next week's New Orleans card.

There were two newcomers to the territory this week, Tim Horner and Tony Anthony. Horner had been wrestling in Mid-Atlantic, while Anthony's whereabouts over the summer are unknown. He was in Mid-Atlantic earlier in the year along with Horner, and the two did travel together extensively early in their careers. Horner and Anthony were used as preliminary wrestlers, though Tony would get a different role and a little bit of a push after about a month.

Mike Bond left the territory, and aside from one booking in Dallas later in the month his whereabouts are unknown. Vinnie Romeo didn't have any bookings here during the week and thus was removed from the SPOT charts, but it doesn't look like he wrestled anywhere else and he's back here as a regular in a couple of weeks.