- August 27, 2019
We begin our look at the year 1979 with the week ending September 2nd: the week before "the week that changed everything" 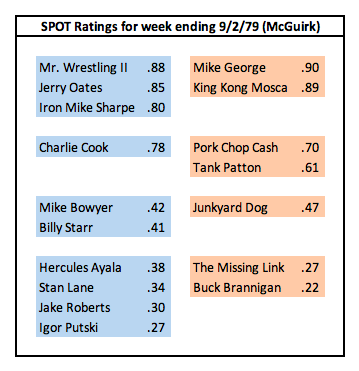 Notes/Analysis: As touched on above, this week is the last week before Bill Watts and Leroy McGuirk had their split. Much has been written about the details of the split and how it occurred, and I'm not here to offer up new information. Based on reading numerous accounts from several different sources, Watts and McGuirk were in the midst of irreconcilable differences on several issues, most notably regarding the racial diversity of the roster and of the growing fan base in parts of the territory. Watts wanted sole control of Louisiana and was willing to let McGuirk "have" Oklahoma, Missouri and Arkansas. At this point in time, the promotion wasn't running very much in those states, but McGuirk had past success operating there. Mississippi, meanwhile, was being promoted by George & Gil Culkin as its' own territory, as they split from McGuirk in 1977 and had filed an anti-trust lawsuit. In Greg Klein's book "The King of New Orleans: How the Junkyard Dog Became Professional Wrestling's First Black Superhero", Klein writes that McGuirk agreed to this split provided Watts settle the Culkins' lawsuit. Watts and the Culkins worked out a deal at some point between late July or mid August, and now Watts had two states to run.

For this week, I'm still calling it the McGuirk territory. Next week, it will become Mid-South, and as McGuirk sets up his new circuit over the next few weeks we will cover both territories in this blog. It would appear the wrestlers all sided with Watts, as none of the wrestlers on the roster at this time would work for McGuirk immediately following the split.

Looking at the talent roster, we see a few familiar faces, but not necessarily in familiar roles. In particular, Junkyard Dog is here as a heel. One of JYD's first appearances in the territory was a couple of weeks earlier in Shreveport; the ad for the show lists him as Junkyard Dog, but the results refer to him as 'Big Daddy Ritter, the self-proclaimed "Junkyard Dog"'. He is still being built up in preliminary matches; this week he wrestled against Billy Starr, Mike Bowyer (twice) and Igor Putski.

Bowyer is Mike Boyette, who had been here many times over the years as Boyette; I'm not sure why he had a different surname this time around. I have him listed as a babyface, as his opponents the last few weeks have been almost all heels. By next week, however, he seems to be on the heel side. I don't know if an actual "turn" occurred, but looking at the cards he's booked on there's a very clear switch from him wrestling against heels to him wrestling against babyfaces.

The Missing Link here at this time is not Dewey Robertson. Dewey was full-time in Mid-Atlantic, and didn't debut the Missing Link gimmick until 1983. This Missing Link had been working for the Culkins, and nobody seems to know who he was or if he wrestled under a different name(s) anywhere else. So his identity truly is "missing".

Mike George was the reigning Louisiana State champ, and defended the title against Charlie Cook in Alexandria, Iron Mike Sharpe in Baton Rouge, and Jerry Oates in Lafayette. Bob Sweetan main-evented Shreveport against King Kong Mosca. Sweetan was full-time in Central States, but showed up unadvertised in Shreveport the week prior to aid Mr. Wrestling II after Tank Patton interfered during II's match with Mosca. This week, II beat Patton while Sweetan and Mosca went to a double disqualification after they both attacked referee Sputnik Monroe.