- July 06, 2019
I continue looking at the year 1975, and this week is the first time we're able to look at week-to-week changes in the SPOT ratings for this year. 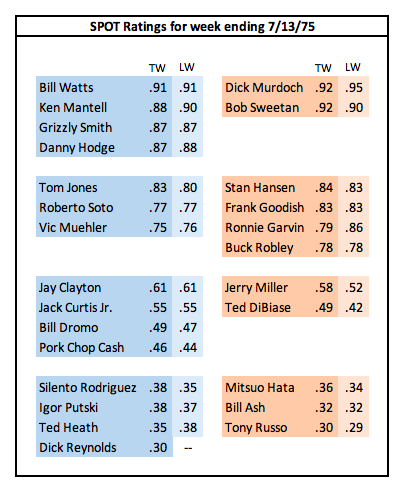 (The Florien data comes from a post on the Kayfabe Memories message board; a couple of online sources list a title change as having occurred in Fort Smith on Wednesday, July 9th, but my research at the Fort Smith Public Library could not find any mention of a show on this day, though the town was regularly run on Wednesdays and generally had ads in the paper)

Analysis/Notes: The three wrestlers with significant changes to their SPOT ratings are Ronnie Garvin, Jerry Miller and Ted DiBiase. Garvin is noticeably moved down the cards, with his SPOT rating decreasing (from a .86 last week to a .79 this week). Both Miller and DiBiase make slight upward moves, as they form a mid-card tag team and get a little bit of a push.

The only newcomer was Dick Reynolds, who had been wrestling sporadically for the AWA earlier in the year.

Wrestlers listed in last week's ratings not in this week's are Hiro Matsuda, Killer Karl Kox, Scandor Akbar and Oni Wiki Wiki. Matsuda spent the week defending the NWA World's Junior Heavyweight title in Stampede. Kox left for a tour with All Japan (where he wrestled as The Spirit) and would be back at the end of the month. Akbar went to Australia. Wiki Wiki was a part-timer at this point in time, though I believe he was involved behind the scenes for the territory, particularly in Louisiana.

Wrestlers not listed above but having at least one booking in the territory during the week included The Spoiler, Dusty Rhodes, Danny Miller, Pat O'Connor and Rip Tyler. Spoiler and Dusty were on opposite sides of a tag team match in Jackson, Spoiler teaming with Bill Watts against Dusty & Dick Murdoch. Miller wrestled Murdoch in Shreveport and was booked against Rip Tyler in Jackson. Tyler was also booked for matches in Shreveport and Tulsa, though in the only results I have for those towns Tyler did not actually appear. O'Connor worked against Murdoch in Tulsa, against Mitsuo Hata in Baton Rouge, and was special referee for the Miller-Murdoch bout in Shreveport.

Vic Muelher lost a loser-leave-town match in North Little Rock the previous week. This week, Robley teamed with Hansen & Goodish in North Little Rock to face Hodge, Tom Jones and an "unknown masked man". I am operating under the assumption that this was Muehler, as he is still working the other towns in the territory (also because a similar angle will happen in Shreveport in a few weeks and the newspaper articles all but say that the masked man is indeed Muehler).