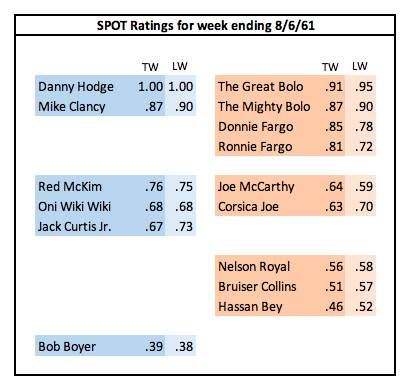 Analysis/Notes: There were no changes to the roster this week. Donnie & Ronnie Fargo continue to move up the cards. Also, Joe McCarthy moves up slightly while Corsica Joe moves down.  Bruiser Collins and Jack Curtis Jr. also move down the cards slightly.

Curtis and Corsica Joe faced off in the main event in Shreveport, a one fall winner take all match with no holds barred, no referee and no time limit. The previous week's card had also seen them in the main event, with Curtis disqualified after going berserk upon seeing his own blood, attacking Corsica, the referee, and other wrestlers who came out to calm him down.

Danny Hodge defended the NWA World's Junior Heavyweight title against Great Bolo in Little Rock. Oni Wiki Wiki defended the Oklahoma title against Nelson Royal in Tulsa. State titles such as this one were used inconsistently over the years, popping up every now and then in some of the towns. In Jack Brisco's book, he says that there was actually only one physical belt used for all the different state titles.

Hodge faced the Fargos in tag team matches twice during the week, teaming with Red McKim in Tulsa and with Oni Wiki Wiki on Oklahoma City. In Tulsa, the Fargos had beaten McKim & another partner the previous week and McKim got Hodge to be his partner this week. The same scenario occurred in OKC with Wiki Wiki instead of McKim.

In addition to the full time wrestlers listed above, Al Galento, Bob Clay and Ken Hill were all booked for at least one match.