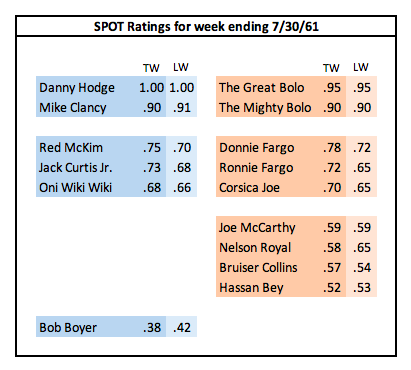 Analysis/Notes:
In their second week in the territory, the Fargos move up the cards. Notable matches for them this week were in Tulsa against Red McKim & Oni Wiki Wiki, in Wichita Falls against the unusual team of Danny Hodge & Bruiser Collins, and winning a one-night tournament in Oklahoma City, beating Hodge & McKim and then Mike Clancy & Wiki Wiki in the finals.

Hodge defended his NWA World's Junior Heavyweight title against Corsica Joe in Springfield, as Joe continued to move slowly up the cards. Nelson Royal continued his descent down the cards as well. While one might think that Royal was being phased out on his way out of the territory, he sticks around for several more weeks.

In addition to wrestlers listed in the ratings, Al Galento, Bob Clay, George Curtis and Pepper Martin all had one known booking during the week. Galento and Clay were part-timers at this point in time, with Galento serving as the storyline matchmaker in Little Rock. Clay was sometimes used as a referee in addition to wrestling part-time, and around this time he was getting into the promoting side of things. Pepper was booked against Bruiser Collins in Shreveport. Most historians have him as the masked Mighty Bolo in the territory at this time, so this was a rare booking as "himself" instead of as a Bolo. George Curtis, aka George Culkin, had been active through the 1950s, but looks to have been wrestling more on an infrequent basis by this point in time. He was the brother-in-law of Jack Curtis (Sr.), so I believe that would make him the uncle-in-law of Jack Curtis Jr. George was booked against Ronnie Fargo in Little Rock and Fort Smith.