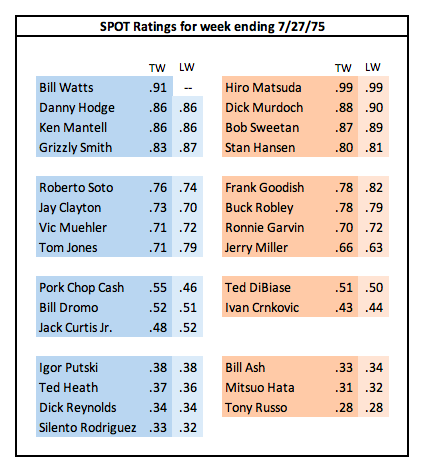 Analysis/Notes: The biggest changes in this week's ratings are for Tom Jones and Pork Chop Cash, who move in opposite directions. Jones moves down the cards while Pork Chop moves up. Bill Watts was not listed in last week's ratings as he had no bookings here between July 9th and the 21st (he worked Atlanta on the 11th and 18th and may have worked other Georgia towns in between), but returns this week.

Not listed in the ratings above are Ken Hill, Oni Wiki Wiki and Treach Phillips, all of whom had only one known booking in the territory this week. Also not listed is Mike Bonham, who subbed for Wiki Wiki.

Hiro Matsuda defended the NWA World's Junior Heavyweight champion during the week against Ken Mantell (Tulsa, Shreveport & North Little Rock) and Danny Hodge (Fort Smith). Hodge & Jay Clayton defended the US Tag Team titles against Buck Robley & Ronnie Garvin in Shreveport and Robley & Ivan Crnkovic in North Little Rock. The Kosciusko ad still lists Hansen & Goodish as US Tag Team champs, so either the title change hadn't been acknowledged there on TV yet (I believe Kosciusko would have gotten the TV from Jackson) or the ad was drawn up before the change occurred.

While firmly entrenched in the mid-card, Bill Dromo is seemingly in line for a push. In notable matches involving him for the week, he beat Stan Hansen in Monroe and was booked in a handicap match against both Ted DiBiase & Jerry Miller in Alexandria.