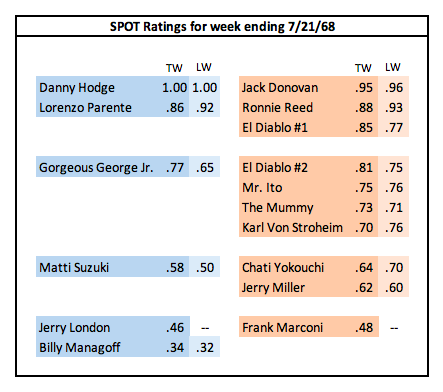 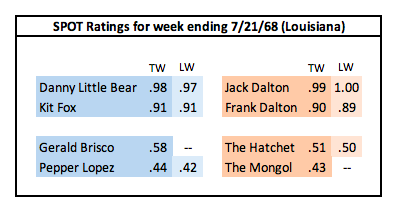 Analysis/Notes: On the babyface side, Gorgeous George Jr. was moved up the cards this week. He wrestled Mr. Ito in Tulsa and Oklahoma City, both matches were in the semi-main event spot. Los Diablos also continue to be moved up the cards, in particular due to a heel vs heel feud with US Tag Team champions Jack Donovan & Ronnie Reed. They got title shots in Fort Smith and Wichita Falls this week.

Karl Von Stroheim and Chati Yokouchi were moved down the cards a little bit. Yokouchi had been teaming with Chuck Karbo. He spent most of this week in prelim singles matches, presumably as a way to re-establish him in a new role as a single (though that wouldn't last).

Lou Thesz made appearances here during the week in Tulsa and Little Rock, in both cases teaming up with Danny Hodge to face Donovan & Reed in title bouts. The Little Rock newspaper reported attendance for Thesz' appearance as "over 3,000" with 300 fans turned away.

Hodge defended his NWA World's Junior Heavyweight title in Oklahoma City against Ronnie Reed. He also faced his frequent tag team partner Lorenzo Parente in Longview as part of that town's "Pontiac tournament", where the winner of a several-week series of matches (loosely called a tournament) would receive a new car.