- July 11, 2019
I continue looking at the year 1961, and this week is the first time we're able to look at week-to-week changes in the SPOT ratings for this year. 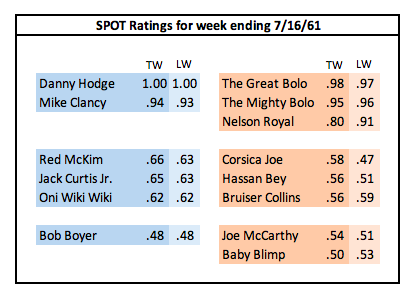 Analysis/Notes: There were no newcomers this week. The two wrestlers with the biggest change in their SPOT ratings were Nelson Royal and Corsica Joe, with Royal being moved down the cards and Corsica Joe moving up them.

McGuirk ran Baton Rouge for the first time this week, with World's Junior Heavyweight champion Danny Hodge and World Women's champion The Fabulous Moolah on the card. The local promoter for Baton Rouge is listed as Mrs. Jimmy Kilshaw.

In addition to the wrestlers listed in the chart, Al Galento took part in a battle royal in Springfield, which led to a babyface turn. In Little Rock, Galento was billed as matchmaker for the promotion, and at this point in time was basically semi-retired as an active wrestler.