- July 02, 2019
Here is our first look at Tri-State Wresting in 1975, covering the week beginning Monday, June 30th and ending Sunday, July 6th. If you're new to the blog, reading this post and this post will help you understand the SPOT rating and what it means. 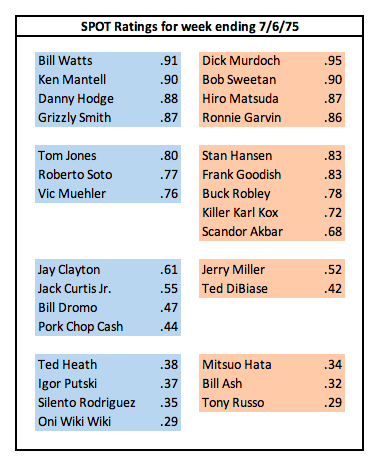 Aside from the full-time members of the roster listed above, Danny Miller, Pat O'Connor and The Spoiler (I'm assuming this was Don Jardine) appeared in the territory during the week. Miller left here in early June and went to Mid-Atlantic, but was still booked here sporadically through the end of July (perhaps to finish out storylines in towns that got the TV on a several week delay), including July 1st in Shreveport against Dick Murdoch. Former World Heavyweight champion O'Connor was booked against Murdoch on June 30th in Tulsa. Spoiler was in Mid-Atlantic for most of the year, but was booked here as a babyface on a handful of cards in Jackson, MS, including July 2nd in Jackson when he teamed with Watts to face Murdoch & Killer Karl Kox. I'm not 100% positive it was Jardine, but I've got no concrete evidence that it wasn't him (ie there are no times when he works Jackson where I have proof he worked for Mid-Atlantic the same night).

Female midget wrestlers Darling Dagmar, Diamond Lil, Honey Girl Paige, Marie LeVeau and Princess Little Dove finished up a three-week stint this week. They primarily wrestled in battle royals featuring all five wrestlers (with the top rope removed so they only had to be thrown over the second rope). They were generally in the mid-card somewhere; their SPOT ratings fall between Scandor Akbar and Jay Clayton in the chart above.

The only newcomer this week was Bill Dromo. This was Dromo's second stint here with the first one being way back in 1968. He had been in Georgia for the first several months of 1975 before coming here.

Allen Klein and Gene Lewis finished up the previous week. I can't find any records of Klein's whereabouts after leaving here. Lewis (Gene Petit aka Cousin Luke among many other gimmicks) had only been here a couple of weeks, but left to go on a tour for New Japan. He would return later in the year.

In future weeks when I list the SPOT ratings, I will also list the ratings for each wrestler the previous week (and maybe even the previous two weeks) so we can track any significant movement up or down the cards for certain wrestlers.
1975 McGuirk