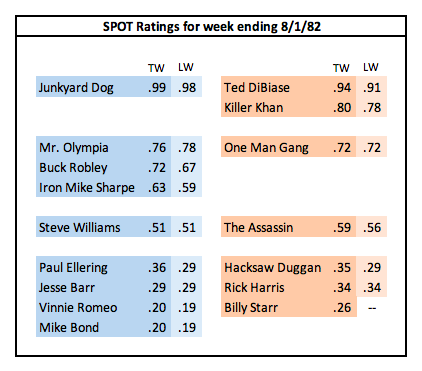 Data/Analysis: With the big Summer Spectacular cards ending the previous week, several wrestlers ended their stays here as well. Ernie Ladd, Big John Studd, the Super Destroyer and Bob Roop all left the territory. Ladd next shows up in mid-August in Georgia, but only stays a couple of weeks. His next full-time stop is in Florida in November. Studd goes to Florida while Super Destroyer returns to Georgia. Roop makes a couple of appearances here later in the year, but the next place he shows up as a regular is in Georgia in February 1983.

Paul Ellering and Hacksaw Duggan continue their slow climb up the cards. Keep in mind that while I update these ratings weekly, the ratings for each "week" are based on a five week period, including the two weeks before and the two weeks after the given week.

Duggan has his highest profile bookings to date this week, in Baton Rouge against Leroy Brown and in Shreveport against Steve Williams. While I don't have results from Baton Rouge, Leroy couldn't have appeared, as he wrestled Jack Brisco in Columbia, SC that night. So it's possible Leroy didn't make his advertised appearance in Alexandria the previous week against Killer Khan as well. The match vs Williams (which Steve won by disqualification) was billed as a "Battle of Football Stars".

Williams also has what may have been his first title shot, against Killer Khan for Khan's Louisiana Heavyweight title in Baton Rouge. While I don't know the actual result of the match, Khan is still billed as champ the following week so he retained the title somehow.

In addition to the full-time roster listed above, Mr. Wrestling II was advertised in a six-man tag team match for the New Orleans card which featured a DiBiase vs Robley main event. Junkyard Dog was not on the card, as he was in Atlanta wrestling against the Super Destroyer at the Omni.