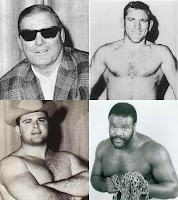 This blog is going to take an in-depth look at the territory run by Leroy McGuirk (and later Bill Watts). Commonly known as Tri-State Wrestling, the promotion actually ran cards in parts of five different states (Oklahoma, Arkansas, Missouri, Louisiana and Texas) by the mid-60s.
By the early 70s, the promotion had expanded into Mississippi and increased their presence in Louisiana. In the fall of 1977, the local promoters in Mississippi, George & Gil Culkin, broke away from the territory and ran shows on their own. Two years later, the Culkins settled their dispute with McGuirk right around the same time as Bill Watts took control of the southern half of the territory (there are numerous versions of how this all went down, and this is not the place for that discussion). Watts named his promotion Mid-South Wrestling while McGuirk continued to run in Oklahoma, Arkansas and Missouri (finally making the Tri-State Wrestling name accurate). McGuirk folded in early 1982 and Watts expanded his reach over the next few years.  In March of 1986, Watts renamed the promotion the Universal Wrestling Federation and attempted a national expansion. I intend to cover everything up to that point in time.

One of the cornerstone features of this blog is our SPOT ratings. SPOT stands for Statistical Position Over Time, and measures a wrestler's average position on the cards. It's a neat way of quantifying a wrestler's spot in the promotion (hence the abbreviation SPOT).

We are going to start by taking a detailed look at 1966. In addition to the SPOT ratings, I am going to attempt to use data to come up with other statistics and metrics, and answer questions that start with "I wonder if we can...". Once we have everything set, we will move forward in time. It will be interesting to see if the stats, templates and methodology I use will continue to yield worthwhile results in future years. Maybe they will, maybe they won't.

At the time of this writing, my data set consists of 456 cards in 1966. I will go into more detail about the data set (including asking the question "how complete is it") in future blog posts. When I calculate SPOT ratings, I use the card as it is advertised/booked, as opposed to the actual results. I do have results for about three-fourths of the cards in this year, which we will use in some of our data experiments going forward. I only use cards/data where I have seen the actual newspaper clipping (or program or other medium); in all cases, I have done the research myself through various online subscription sites or by visiting libraries (even if this means duplicating research that is already out there).

The SPOT rating is a number between .000 and 1.000. A rating of 1.000 would mean the wrestler was ALWAYS in the main event. The ratings below are calculated based on all of a wrestler's bookings in the territory during the calendar year. I've divided the wrestlers into four categories: Main Eventers, Upper Mid-Card, Mid-Card and Lower Card. I made the cutoffs for these categories based on my thorough examination of all the cards, while trying to make the cutoff points "nice" numbers. It will be interesting to see if these cutoff points continue to be reasonable going forward.

The next several blog posts will offer up some brief biographical info on many of these wrestlers, plus give mention to some of the wrestlers who were booked to wrestle here during 1966 but did not meet the "minimum number of bookings" criteria, as well as women wrestlers and others that were considered special attractions at the time.

Wrestlers are listed by "gimmick". There are a couple of situations in 1966 that bear explanation, either a wrestler working two different gimmicks or a gimmick being portrayed by more than one wrestler. I will cover these situations in the biographical info over the next several posts.

In addition to the SPOT ratings, these charts also let you see when wrestlers came into and left the territory, when they may have had extended breaks, and how often they were booked (based on the cards I have). The biographical data provided in future blog posts will attempt to list what territories each wrestler came from and where they went after they left. Babyfaces are highlighted in blue, heels in orange. Wrestlers who switched during the year are highlighted in gold.