The below chart lists the wrestlers who were regulars in the territory between July 1st and September 30th, 1978. They are ranked by their Statistical Position Over Time, a number between .000 and 1.000 representing the average spot on the cards they were booked on (a 1.000 would mean they were always in the main event). 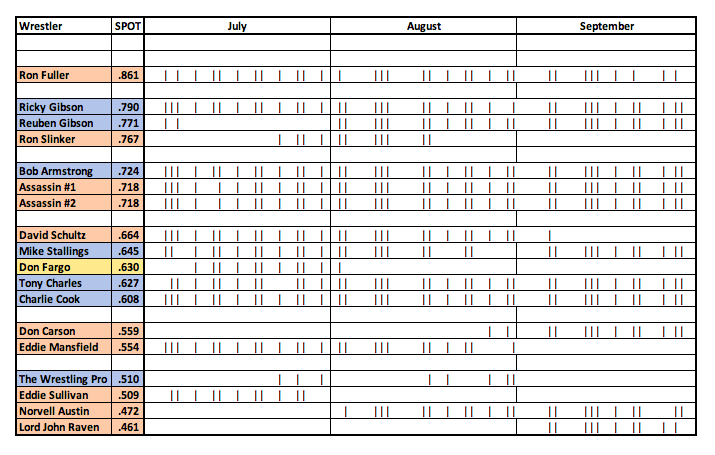 Don Fargo came in as a babyface but turned heel after a couple of weeks and then left about a week later, which is the most Don Fargo-est thing ever.

Besides Fargo, other newcomers in the third quarter of 1978 were Don Carson, Norvell Austin, Lord John Raven, Ron Slinker and Tony Charles.

Carson, Slinker and Charles all came from Knoxville. Slinker stayed for about a month and then went back to Knoxville. He was presented as a karate expert and was aligned with Ron Fuller here, helping Ron in his feud with Bob Armstrong. While in Knoxville, Carson had transitioned from wrestling full-time to managing the Mongolian Stomper, but upon coming here went back into the ring as a full-time wrestler.

Lord Raven came in for a few weeks in September. He had been a wrestler and manager years prior in Gulf Coast.

Norvell Austin spent the first six months of the year in Memphis, then worked for the Culkins in Mississippi for a month before coming here in early August.

Reuben Gibson left for about a month to work for Memphis, but would return in early August.

Others who left the territory during the quarter were David Schultz, Eddie Mansfield, Eddie Sullivan and Mike Stallings.

As you can see, there was a lot of talent switching back-and-forth between here and Knoxville. Running two separate territories, Fuller was able to keep things fresh by having wrestlers move between the two areas. Two of the Knoxville territories' top stars, the Mongolian Stomper and Robert Fuller, started here at the very end of the quarter and would become players in the last three months of the year.

The Wrestling Pro continued to be used on a part-time basis. Billy Spears managed the Assassins throughout the quarter. Other wrestlers with bookings during the quarter included Ricky Fields, Greg Peterson, the Outlaw, Mike Hendricks and NWA World Heavyweight champion Harley Race.

Race was booked to defend the title against Bob Armstrong twice in late September, once each in Montgomery and Mobile. In both towns, Armstrong had won a one-night tournament on the previous card to earn the title shot. Race was also booked in a non-title bout against Ricky Gibson in Panama City.

The most frequently occurring main events during the quarter were Bob Armstrong vs. Ron Fuller and Ricky & Reuben Gibson vs. the Assassins.

The Armstrong-Fuller feud was especially prevalent in Mobile, with them squaring off in singles bouts six times during the quarter. In July, they squared off in a boxing match one week followed by a  Southeastern title match with the disqualification rule waived the following week. Armstrong then faced Fuller's ally Ron Slinker two weeks in a row, followed by a tag match teaming with Tony Charles against Fuller & Slinker.  After that it was four weeks of Southeastern title matches between the two, including an Indian strap match, a steel cage match and a lumberjack match.

The Gibsons faced the Assassins three weeks in a row in Panama City in September in matches for the Southeastern Tag Team titles. The second match was a steel cage bout and the third match was two out of three falls.

As mentioned above, Robert Fuller and the Mongolian Stomper start here at the end of the quarter. Robert comes in as a babyface, Stomper as a heel, and Ron Fuller is still the lead heel in the area. You can probably figure out what happens next. Also, another member of the (extended) Fuller family comes in during the fourth quarter, and one of the Assassins leaves town. We'll cover this and more next week on Charting the Territories.
1978 Southeastern