In the second quarter of 1978, the top wrestlers in the Pacific Northwest included Jerry Oates, Dutch Savage, Bull Ramos and The Iron Sheik.

The below chart lists the wrestlers who were regulars in the territory between April 1st and June 30th, 1978. They are ranked by their Statistical Position Over Time, a number between .000 and 1.000 representing their average spot on the cards they were booked on (a 1.000 would mean they were always in the main event). 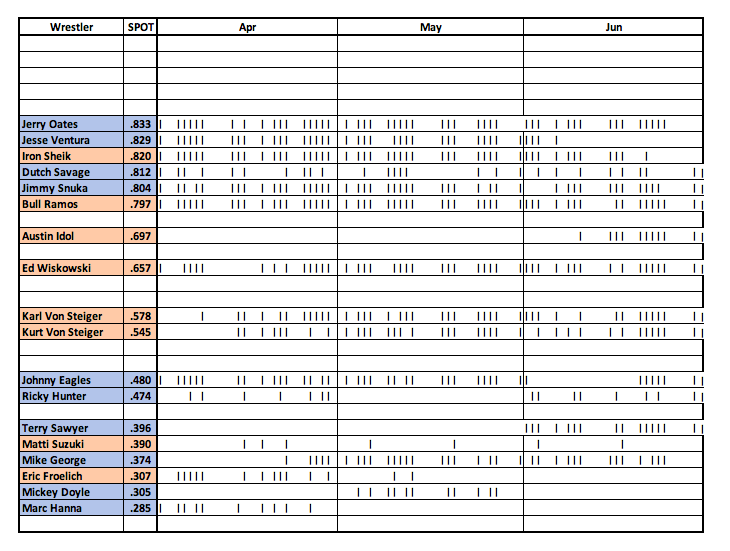 Austin Idol - Idol debuted in 1972, wrestling as Mike McCord (and as Dennis McCord in some places) before being injured in the 1975 plane crash that took the life of Bobby Shane. He returned in 1977, working a few shows in Florida before staging a full-time comeback in March 1978 as Austin Idol in east Texas. He came here in early June.

Karl & Kurt Von Steiger - The Von Steigers had a very brief stay in February working for Gulas, but prior to that hadn't been full-time anywhere in over a year. They had numerous stints in the Pacific Northwest dating back to 1968, and returned here in April.

Mickey Doyle - Doyle had been here previously, a six-month stint in 1973. Prior to coming here in May, the most recent info I have puts him in Southern California from December 1977 to March 1978. He has bookings here for about a month, and then nothing until returning in August. Doyle later teamed with Al Snow in the early 90s in and around Michigan.

Mike George - George's first and only stint in the territory began in April when he came here from Central States. He left at the end of June and went to Tri-State. George's career saw him wrestle mostly in the midwest, most often in Central States. His most frequent opponents were fellow Central States mainstays Bob Brown and Roger Kirby.

Terry Sawyer - Sawyer's career began in 1972, and lasted through 1980. His only stint here started at the beginning of June when he came in from Southern California.

Eric Froelich, Matti Suzuki and Ricky Hunter were not full-timers but were booked often enough to be included in the SPOT rankings.

Jerry Oates - After a successful run here that saw him win both the tag team titles and the heavyweight title, Oates left in late June and went to Mid-Atlantic, where he teamed up with his brother Ted.

Marc Hanna - Hanna left in late April and returned to the AWA as Steve Olsonoski.

The Iron Sheik - Sheik left in late June, heading further north to wrestle for All-Star in Vancouver. His first run in the WWWF would begin in early 1979, wrestling as Hussein Arab.

Jesse Ventura - Jesse left in early June, and would spend the second half of the year in Central States. He returned for a couple of weeks in February 1979 and again for several days in October.

The two most frequently occurring main events during the quarter (using only the cards I have first-hand data for) both involved the team of Bull Ramos & The Iron Sheik. They faced the team of Jerry Oates & Jesse Ventura on seven different occasions, and they faced Dutch Savage & Jimmy Snuka six times.

NOTE: The major historical web sites have the above title change incorrectly listed as April 18th in Portland. The Portland newspaper listed Oates & Ventura as successfully defending the titles against Ramos & Sheik on the 18th. The Salem newspaper explicitly states Ramos & Sheik winning the titles on the 27th.

The first quarter of 1978 saw Jesse Ventura return to the area. Ventura would become known as one of the great talkers in wrestling. The second quarter saw the debut of Austin Idol, who also became known as one of wrestling's best talkers. Will the third quarter see the arrival of another great talker? Find out in the next installment of Charting the Territories, when we cover July through September of 1978.
1978 Pacific Northwest