Commonly referred to as the "Pacific Northwest" territory, Don Owen Sports, Inc. promoted wrestling in Oregon and Washington, generally using the names "Portland Wrestling" and "Big Time Wrestling". Some of the cards in Washington state were promoted by area mainstay Dutch Savage. These cards sometimes featured wrestlers from All-Star in Vancouver on the undercard as well as stars like Don Leo Jonathan and Gene Kiniski mixed in with the regular crew.

It was one of the smaller territories, not just geographically but in the number of wrestlers on the roster. They generally ran one show a night, but even with a small roster there were times when they ran two shows a night with a split crew.

Normally, I only use originally-sourced material for these columns and the underlying data. However, the Portland newspaper (The Oregonian) did not publish cards or results the last several weeks of 1978. Therefore, I am using the Portland cards listed on wrestlingdata.com only for those weeks where there was no information in the newspaper. Portland was run every Saturday night and once or twice a month on Tuesdays. Seattle was run about twice a month on Wednesdays. Salem OR was run weekly on Thursdays and Eugene OR was run weekly on Fridays. Other towns I have info for include Albany OR, Chehalis WA, Lebanon OR and Tacoma WA. They also ran in Roseburg OR and Seaside OR but I don't have access to newspaper clippings from those towns. 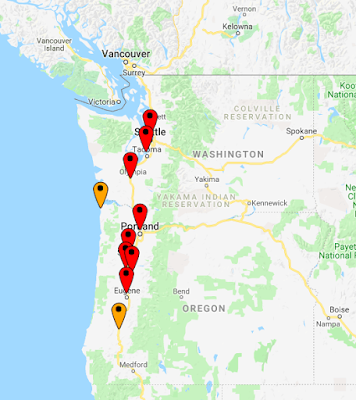 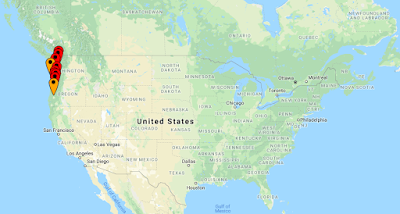 Dutch Savage - Dutch was a regular here dating back to 1970. In fact, aside from a couple of tours of Japan, he stuck to the west coast of the U.S. and Canada for virtually the entire decade. Dutch originated the Coal Miner's Glove match back in 1972 and reportedly never lost a match under that stipulation.

Gino Hernandez - 20-year old Gino Hernandez had been wrestling since August 1975. His first and only stint here began in September 1977.

Jerry Oates - Jerry had been wrestling since 1970. This was his first and only stint in the Pacific Northwest, starting the last week of 1977.

Jimmy Snuka - Snuka had been wrestling on-and-off here dating back to 1971. After spending six months wrestling in east Texas, he returned here in November 1977.

Johnny Eagles - Born in Manchester England, Eagles came to the states in 1971. He had worked here on-and-off dating back to 1975. Eagles spent the first half of 1977 in Mid-Atlantic and returned here in November. He was reportedly trained by a British wrestler named Dick the Doormouse.

Marc Hanna - According to wrestlingdata.com this was Steve Olsonoski, best known in wrestling as Steve O. He debuted for the AWA in June 1977 and came here in October.

Skip Young - Skip debuted in 1974. He had a previous stint here in 1975, and came back in October 1977 from east Texas. It's been reported that Skip was friends with David Von Erich and that David encouraged him to become a wrestler. Skip was often billed as Wildcat Young here.

Bob Kincaid - Best known as "No Class" Bobby Bass, Kincaid's first stint here began in September 1977. According to SLAM! Sports, the "No Class" nickname was given to him by Ed Whalen. Here he was billed as "Bad Boy" Bob Kincaid.

Buddy Rose - Rose had been here pretty much full-time since August of 1976. Trained by Verne Gagne and Billy Robinson, his earliest known matches were against Ric Flair and Bob Remus (Sgt. Slaughter).

Ed Wiskowski - Later known as Col. DeBeers, Wiskowski came to the Pacific Northwest for the first time in August 1977. He spent the first half of the year in Central States and Australia, then did a tour for All Japan in July.

John Anson - "Handsome" John Anson began his first and only stint as a full-timer here in May 1977. He had made a handful of appearances here prior to that while he was working for All-Star Wrestling in Vancouver. Anson also wrestled as Karl Von Schotz, primarily in Toronto, Detroit and Buffalo.

Jonathan Boyd was technically on the roster (as a heel) at this time as well, but left the first week of January. He would return later in the year.

Lonnie "Moondog" Mayne wrestled here the last several months of 1977, with his last bookings being on Christmas Day before heading to Southern California to wrestle there. Sadly, these would be his last appearances in the territory. Mayne passed away in August 1978, a day after being severely injured in an automobile accident outside of Los Angeles.
1978 Pacific Northwest