In the first quarter of 1978, the top wrestlers in Mid-America included Randy Savage, Ox Baker, Pez Whatley and Lanny Poffo.


The below chart lists the wrestlers who were regulars in Mid-America between January 1st and March 31st, 1978. They are ranked by their Statistical Position Over Time, a number between .000 and 1.000 representing their average spot on the cards they were booked on; a 1.000 would mean they were always in the main event) 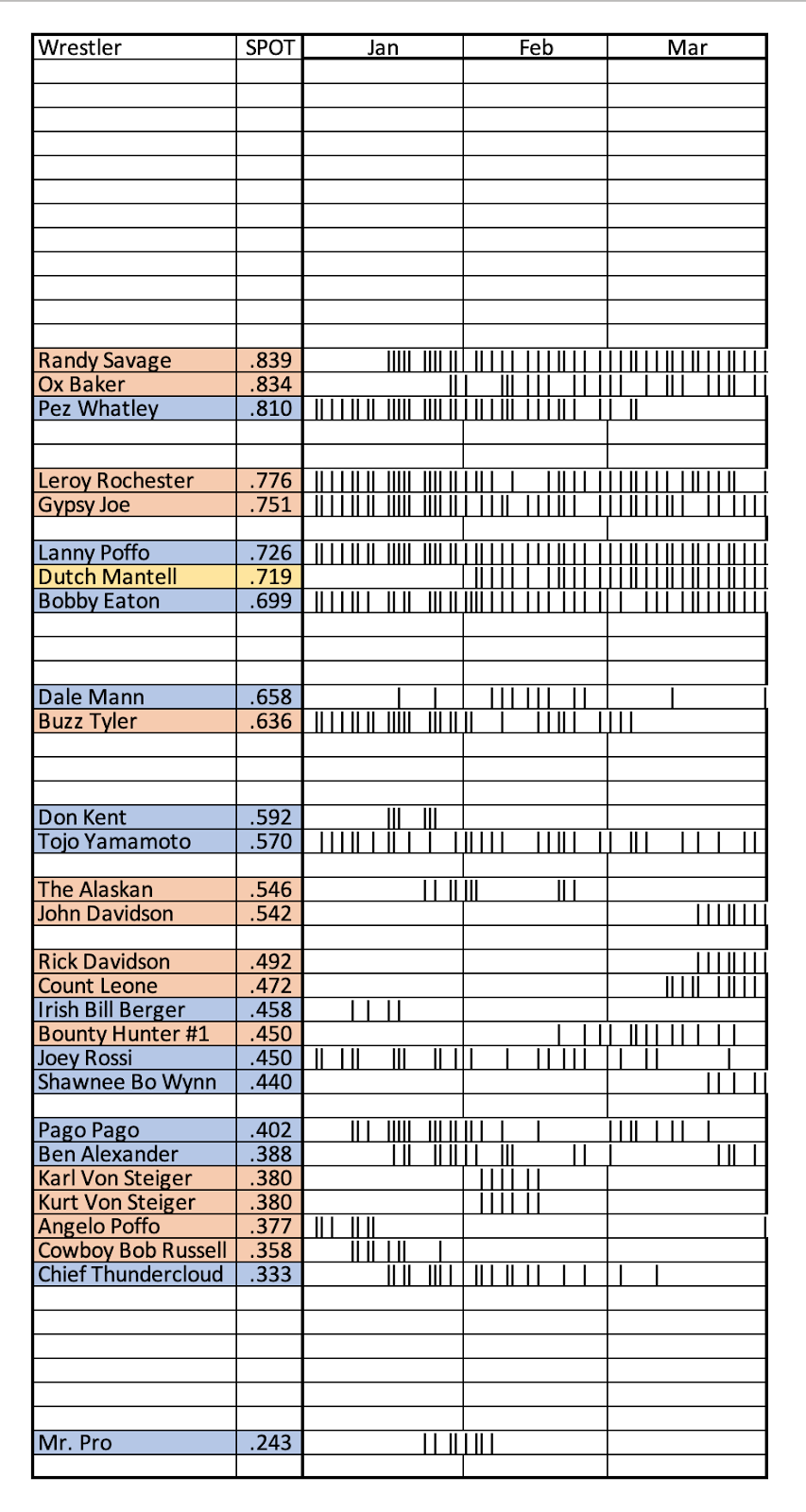 Dutch Mantell was a heel when he started here but turned babyface by the end of the month.

The Alaskan - This was almost certainly Mike York (as opposed to Jay York). He came here in late January after spending some time wrestling for the Culkins in Mississippi and a couple of weeks in Memphis. He left after about a month and may have gone to Puerto Rico (though that might have been Jay) before turning up in June back in Memphis.

Ben Alexander - Alexander started as a regular in mid-January, this seems to be his debut. It is possible he did some TVs before going on the road full time. After March his name stops showing up, though again he may have been used on TV or as a fill-in on the road. In May he went to Grand Prix.

Bounty Hunter #1 - Started in mid-February. For the first few weeks, this wrestler was advertised as Bounty Hunter #1, but it was eventually shortened to just Bounty Hunter. Online sources credit these appearances to both Jerry & David Novak; both had worked for Gulas some in 1977 after the split. Neither of them were in another territory during this time, so I don't have any evidence as to whether it was just one of them, or both, or someone else.

Chief Thundercloud - Chief started back here in mid-January after taking a month off. It is unknown if this was injury related or there was another reason, but I don't believe he was anywhere else during that time. He left in March and went to Puerto Rico.

Count Leone - I have no information on who this wrestler was. He came in for a couple of weeks in March.

Cowboy Bob Russell - Like Count Leone, I don't know anything else about this wrestler. He was advertised on cards for a couple of weeks in January. However, his name doesn't appear in most of the results from those shows.

Dale Mann - Dale came here in mid-January and stayed through the end of March. Dale is best known for promoting shows in Kentucky; at times he was aligned with Gulas and other times with Jarrett, at times he promoted against them. He was also aligned with Phil Golden.

Dutch Mantell - Dutch started here in early February, coming from east Texas. Dutch was in the territory at the time of the split in 1977 and originally went with Jarrett, though he only stayed a few weeks after the split before going to Florida.

Irish Bill Berger - Berger, a mainstay of the Pittsburgh end of the WWWF territory, came in for a couple of weeks in January.

John & Rick Davidson - While they primarily worked as a team, John & Rick were in different territories in late 1977. John was in Central States and Rick was in Tri-State. After September 1977, their names don't show up anywhere until they started here in mid-March.

Karl & Kurt Von Steiger - The Von Steigers were in Portland as late as August 1977, then their names don't appear anywhere until they came here for a couple of weeks in February. After leaving here they returned to Portland.

Mr. Pro - I believe this was Devoy Brunson, who had wrestled both as himself and as Mr. Pro for Gulas dating back a few years. He came in for a couple of weeks in late January.

Ox Baker - Ox had spent the month of January working shots for Georgia, east Texas, Detroit and Florida before coming here at the end of the month. He hadn't been a regular in the territory since 1966, though he may have had a couple of bookings here in the fall of 1977.

Pago Pago - I'm not sure who this wrestler is. Online sources credit these matches to a wrestler who worked as "King Pago Pago" and "Alo Pago Pago", but that wrestler primarily stayed on the west coast and hadn't been wrestling full time for many years prior to these appearances.

Randy Savage - Savage started in mid-January, coming from Georgia. His first advertised date was a few days after his father (Angelo Poffo) left the territory.

Shawnee Bo Wynn - Shawnee worked for a couple of weeks here starting in mid-March. He then shows up here again in May for a longer run. He was billed as a former Tennessee State & pro football player. My own research found a William Wynn who played at Tennessee State, then played pro (starting in 1973) for the Eagles and Redskins until retiring due to a knee injury in 1977, so it would seem to be the same person.
UPDATE: After doing further research, I found reference to Lou Thesz training a Shawney Wynn to be a wrestler in early 1978. Shawney played for Tennessee State and was drafted by the Houston Texans of the WFL in 1974.

Others who left the territory in this time period:

Angelo Poffo - Angelo left in mid-January and went to Puerto Rico. He would return in April, though with a different (and rather unique) name.

Buzz Tyler - Buzz' last date here as a regular was March 5th, though he did come back for a week in April. After that, I don't have any info on his whereabouts until he shows up in Central States in June 1980.

Don Kent - Kent left at the end of January and went back to Detroit full time, though he may have done a brief stint in Puerto Rico as well.

Not included in the above lists are Rip Tyler, who left the first week of January, and Ormond Mulumba and Cowboy Frankie Lane, who started the last week of March. Also, Tom Renesto Sr. made a few appearances as a special referee starting at the end of March, which would lead to him coming out of retirement for a brief run starting in April.

Bad Boy Hines continued to manage Buzz & Rip Tyler.  After Rip left, he added Gypsy Joe & Leroy Rochester to his stable. By February, he was gone from the territory.

Chuy (also known as Chuy Little Fox) managed Chief Thundercloud in January. His name stops appearing in ads at the end of January, so I don't know if he continued to manage Thundercloud for the rest of his stint here. Chuy would return with the Chief later in the year.

Nationally known stars passing through the territory during the time period: Andre the Giant, NWA World champ Harley Race (for one defense against Lanny Poffo on 2/4 in Chattanooga), Haystacks Calhoun and The Sheik. Andre was in for a week in March, Haystacks for 3 weeks in March, and the Sheik actually wrestled for several weeks, but exclusively in Birmingham and Nashville. Don Ross worked a couple of weeks in January, still being billed primarily as a special attraction. He would return for a week in May, and then it appears he has no wrestling bookings until resurfacing in California as Ripper Savage in the 1980s. Chattanooga got the Georgia television, so several Georgia stars worked occasionally in Chattanooga in the winter months. These included Dusty Rhodes, Dick Slater, Lars Anderson, Mr. Wrestling #2, Ole Anderson, Sgt. Jacques Goulet, Stan Hansen, Tommy Rich and Tony Atlas.

Other wrestlers with bookings during the time period included Arvil Hutto, Bob Hamby, Butch Thornton, Dennis Hall, George Gulas, Len Rossi, Luis Martinez, the Masked Marvel, Mike (or Mark) Sciarra, Mike Jackson and Thurman Dolan. Thornton, as mentioned perviously, pretty much only worked in Chattanooga. For a point of reference, his SPOT on those cards was a .383 . Gulas worked a handful of shots in January and February. He would return to a full-time schedule in the spring. Len Rossi's comeback was short-lived; by January he was only wrestling part-time. His last date was February 20th, then nothing until a handful of dates in March 1979.

Women wrestlers with more than one booking during the time period were the Black Widow and Regina Tucker.

Midget wrestlers the Carolina Kid and Fuzzy Cupid came in for a couple of weeks in March.
1978 Gulas