The below chart lists the wrestlers who were regulars in Florida at some point between April 1st and June 30th, 1966. They are ranked by their SPOT (Statistical Position Over Time, a number between .000 and 1.000 representing their average spot on the cards they were booked on; a 1.000 would mean they were always in the main event)

Don McClarity - McClarity appears to have wrestled here once early in his career in 1959, but this was his first run as a regular. He came here in late May after wrestling in Detroit and Toronto. Teamed with Roy McClarity in a few places in the late 50s and 60s, but the two were not actually related.

George Drake - Also known as Catalina Drake, he came here at the end of March from the AWA for his third stint in the territory. He left in early June and went to Mid-Atlantic. At the end of 1967, Drake took his own life at 39 years of age while wrestling in Northern California. Was said to have been born on Santa Catalina Island, hence the "Catalina" Drake name.

Joe Millich - Millich came here at the beginning of May for his second stint in the territory, with the first one having been back in 1954. He stayed a little over a month. Before coming here he worked a handful of shots for the WWWF in the first few months of the year. After leaving, he worked occasional shots in Illinois and Pennsylvania before going to Tri-State as Slim Marvin in December.

Kurt & Skull Von Stroheim - The Von Stroheims first started teaming regularly in April 1963 in Tennessee. At various times over the years in different territories they were billed as "Kurt & Skull", "Karl & Skull" or "Karl & Kurt". In Florida it was usually Kurt & Skull, but on some occasions newspaper ads listed them as Karl & Skull. They first met in Detroit in 1962, where Skull was wrestling as Skull Nurnberg. The duo came here in mid-June from Mid-Atlantic for their second stint in the territory.

Les Welch - Welch, a member of the Welch/Fuller wrestling family, worked a handful of shows here in 1950 and 1951, then in the summer of 1965 while he was primarily wrestling in Tennessee. He came here as a regular at the end of March after spending the beginning of the year in east Tennessee. Les was a Navy vet and served in World War II.

Pedro Godoy - Godoy had been wrestling in Florida on and off dating all the way back to 1949. He came here in mid-May after wrestling in Hawaii as the Golden Terror. Teamed with Juan Sebastian as the Masked Medics in the early 60s and as the Rugged Russians in the early 70s.

Tony Nero - Nero had 2 previous stints in the territory, plus came in for a week in November 1965. This time around, he came in mid-April from Georgia. He stayed for a little over a month, then went back to Georgia for a week at the end of May before going to Mid-Atlantic. He would return in 1969. Like Les Welch, he was a Navy vet and served in World War II. Had a run as the Black Demon in the WWWF in the late 60s and early 70s.

Wahoo McDaniel - Wahoo came to Florida for the first time in the spring. He was booked in Fort Lauderdale on April 8th, but after that his next booking here was May 9th in Orlando. In April Wahoo was a regular in Amarillo, but seemed to have a few days off around the 8th. He had been selected by the Miami Dolphins in the AFL's expansion draft back in January, so perhaps the April booking was tied into a meeting with the Dolphins organization. Wahoo was a big Atlanta Braves fan, did not like the New York Yankees, and was willing to fight over it. I say this from personal experience.

Duke Keomuka, Eddie Graham, Hiro Matsuda and Sam Steamboat all went to Japan in May for a tour that lasted until early July.

Jesse James - James went to Mid-Atlantic in early July. He would return in 1970.

Klondike Bill - Bill left at the beginning of July and went to Mid-Atlantic. He would return in 1967.

Missouri Mauler - Mauler left in May and went to Mid-Atlantic. He would return for a few shots later in the year and in early 1968, but would not come back full-time until 1969.

Omar Atlas - Omar left in early May and went to Tennessee. He would return in 1967.

Tito Carreon - Carreon left at the end of June and went to Georgia. His career as a full-time wrestler ended a few months later, with his final known match on September 2nd, though he came out of retirement for one match at 73 years of age, which would would have been in 2002 or 2003.

Other wrestlers with bookings during the time period include Bill Howard, Krusher (Swede) Karlsson, Rudy Valez, Charley Carr, Johnny Bence and Tom Jones and Matt Jewell (Bearcat Brown). Like Tiger Conway and Calvin Pullins in March, Jones and Jewell wrestled exclusively against each other or in mixed tags with Sweet Georgia Brown and the African Princess.

On May 10th in Tampa, Lou Thesz came in to face the Missouri Mauler. They had wrestled each other at least once before, on November 30th, 1965 also in Tampa, when Thesz was NWA World Heavyweight champion. Also on this card was Eddie Graham & Bob Orton defending the Florida version of the NWA World Tag Team titles against Tarzan Tyler & Sputnik Monroe, plus the first Tampa appearance of Wahoo McDaniel. 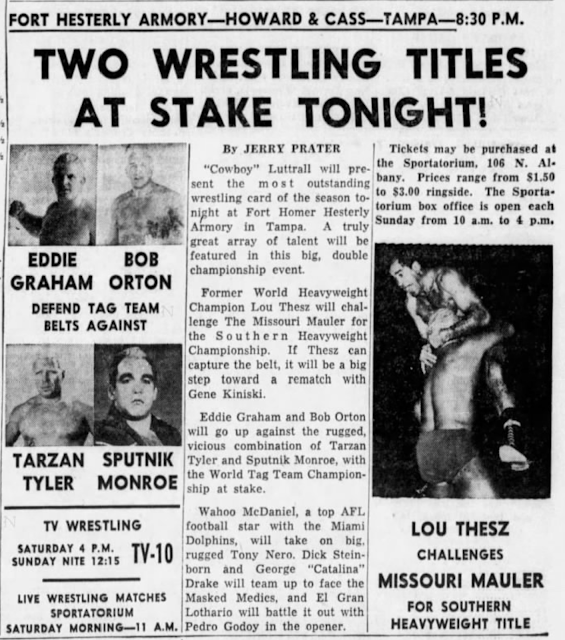