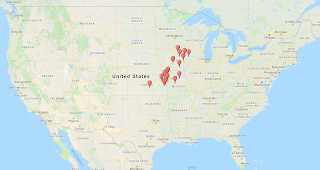 In the second quarter of 1966, the top wrestlers in Central States included Cowboy Bob Ellis, the Stomper, Big Tiny (Grizzly) Smith, Bob Geigel, the Butcher and the Viking.

The below chart lists the wrestlers who were regulars in Central States at some point between April 1st and June 30th, 1966. They are ranked by their SPOT (Statistical Position Over Time, a number between .000 and 1.000 representing their average spot on the cards they were booked on; a 1.000 would mean they were always in the main event)

Alex Perez - Perez came here in late May from Amarillo. This was his first stint in Central States. Alex got into wrestling in the early 1950s after being a boxer, a semi-pro baseball player and a Deputy Sheriff.

Big Tiny Smith - Better known as Grizzly Smith. I wouldn't consider him a full-timer here, but he did work the Kansas City and St. Joseph cards for about a month starting in early June. He had been wrestling in Tri-State, and still worked some shots there during this time. Teamed with Luke Brown as the Kentuckians; the team feuded with the Assassins (Jody Hamilton & Tom Renesto) in numerous territories throughout the 60s. After a month here he went to All-Star in Nebraska. This was his only stint in the territory.

Bobby Hart - Hart came from Amarillo in mid-April for his first and only stint here. Wrestled in several successful tag teams, including under a mask as Dante teaming with the Great Mephisto, and with Bob Griffin as the masked Patriots.

Chuck Karbo - Wrestled here for a month starting in late May for his first and only run in the territory. He had been wrestling in Tri-State, and returned there at the end of June. While he is best known for his stints in Tri-State, he tended to wrestle in Arizona in the winters due to the climate.

Johnny Kace - Kace was here previously in 1963. Came here in June after wrestling shots in St. Louis, the AWA and Gulf Coast the first several months of the year. Stayed here a month and then wrestled for the AWA and in Indianapolis. From 1971 to 1984 he served as school superintendent of the Emmons Grade School District in Antioch, IL.

Kenny Mack - Mack wrestled here for about a month and a half in May and June. Prior to that, his last known whereabouts were in Tennessee in the fall of 1965. After his time here, he went to Gulf Coast for a week and then to Georgia.

The Butcher - Stayed through June and then went to Georgia. I don't know if manager Dandy Jack went with him, but Jack was in Georgia by March 1967 and his name doesn't appear here after the Butcher left.

Cowboy Bob Ellis - Ellis spent most of the summer down south, wrestling in Tri-State and East Texas. He would come back here in October.

Jerry Kozak - Kozak left at the end of June and went to Tri-State. He would not return as a regular, but did work here at least once in 1976.

Lee Henning - Henning stopped working here in mid-May, and I can't find any record of him wrestling anywhere else over the summer. He would return at the end of October.

Oki Shikina - Shikina left in early June. His whereabouts are unknown until he showed up in Mid-Atlantic in November. He would return here in 1970.

Ron Reed - Reed left at the end of June and went to All-Star in Nebraska. He would return in the fall.

Tor Kamata - Kamata went to Tri-State in late June. He would return in October.

Other wrestlers with bookings here during the time period include the Alaskan (probably Jay York but not 100% positive), Carlos Kalon (aka Carlos Colon, more on him in Part 3), Don Carson, Ramon Zavalza and rookie Terry Funk.

Midget wrestlers Cowboy Bradley and Fuzzy Cupid were in for a week in early May. Later in the month, Jamiaca Kid, Little Beaver, Little Brutus and Sky Low Low were here for a week and a half.

In addition to the weekly Thursday night cards in Kansas City, the promotion ran the town (in the same venue) approximately once a month on Tuesdays. These cards were often loaded, as was the case on May 17th when NWA World Heavyweight champion Gene Kiniski defended the title against the Stomper. The card also saw Dick the Bruiser come in to team with Cowboy Bob Ellis against Bob Geigel & Bob Brown as well as five other matches.