The below chart lists the wrestlers who were regulars in WCW at some point between January 1st and March 31st, 1966. They are ranked by their SPOT (Statistical Position Over Time, a number between .000 and 1.000 representing their average spot on the cards they were booked on; a 1.000 would mean they were always in the main event)

Since all the foreign-based talent went home after the season ended the previous December, the entire foreign roster were either newcomers or returnees:

Art Nelson - Nelson had been wrestling in Vancouver and came here for his first WCW tour in January.

Dick Steinborn - Steinborn was wrestling in Florida in December 1965, then worked at least one shot in Northern California and stayed a week or two in Hawaii before coming to Australia. He had been here previously for a two month stint in 1965. He stayed here through mid-April, then went to Georgia for a few weeks after a quick stopover in Hawaii.

Dominic DeNucci - DeNucci had been coming to Australia since WCW first opened shop in October 1964. At the end of 1965 he was wrestling in Northern California. DeNucci later trained numerous wrestlers in the Pittsburgh area, including Mick Foley, Shane Douglas and referee Mark Curtis.

Killer Kowalski - Like DeNucci, Kowalski was with WCW from their beginnings in late 1964. He had spent several months in Hawaii at the end of 1965. He became a vegetarian at some point in the late 60's and was also smoke- and alcohol-free. After retiring, he trained numerous wrestlers in Massachusetts, including Triple H, Kofi Kingston, Chyna, Tommaso Ciampa, Eddie Edwards and Perry Saturn.

Luther Lindsay - Lindsay came here from Hawaii in January for his first and only stint in the territory. He is widely considered as one of the top legitimate submission artists in pro wrestling. It is believed he was the first African-American to challenge for the NWA World Heavyweight title, facing then-champ Lou Thesz in July 1953 in Tacoma, Washington. He stayed here until the end of February, after which he went back to Hawaii.

Nick Bockwinkel - Bockwinkel had been in Hawaii for a couple of months before coming here in late February for his first stint with WCW. Trained by his father, Warren Bockwinkel, and Lou Thesz, Nick played high school football for McKinley High in St. Louis while his father was wrestling there. The following year, when Warren was wrestling in Northern California, Nick played for Jefferson High School in Daly City.

Pampero Firpo - Firpo had been wrestling in Amarillo (using the name Ivan Firpo) at the end of 1965. He also worked at least one shot in Northern California after Christmas before coming here in January for his first and only stint in WCW. He left in early April and went to Hawaii.

Pepper Gomez - Famous for his "cast-iron stomach", this run in Australia was the first (and only) for Pepper. He was wrestling in Northern California at the end of 1965. He came here in January and stayed through early April, going to Hawaii briefly and then back to Northern California.

Waldo Von Erich - This was Waldo's first tour of Australia, coming here from the WWWF. Best-known as Fritz Von Erich's storyline brother, Waldo was born in Toronto. The first time he teamed with Fritz was in Ontario in 1957, though by this point in time they had not teamed up anywhere since 1960 (though that would change by the end of 1966).

On February 25th in Sydney, the promotion's World Heavyweight title was defended as champ DeNucci faced Kowalski. The undercard featured a "Florida Cyclone" match, which I'm guessing was awfully similar to (if not exactly like) a Texas Tornado match. Online sources list Clem Lakis as subbing for Luther Lindsay. The undercard also featured Roy Heffernan vs Johnny Boyd and Larry O'Dea & Brian Ashby vs George Lackey & Abe Lightfoot. The Bockwinkel-Fury match may not have happened. 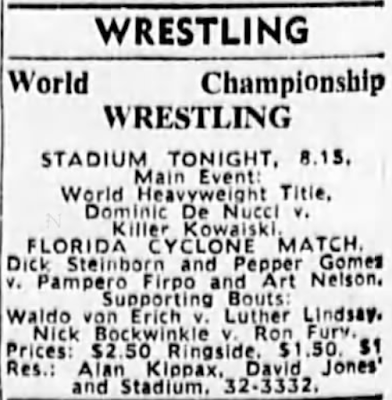