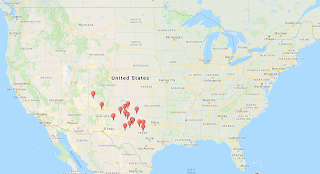 The below chart lists the wrestlers who were regulars in Amarillo at some point between October 1st and December 31st, 1966. They are ranked by their SPOT (Statistical Position Over Time, a number between .000 and 1.000 representing their average spot on the cards they were booked on; a 1.000 would mean they were always in the main event)

The Lawman continued to wrestle on both sides throughout the quarter, with him tending to be on the babyface side in Abilene and a heel in most other towns.

Alex Perez - Perez returned to the promotion after just under five months in Central States.

The Batman - Adam West's portrayal of the comic book crime fighter debuted on TV in January of 1966, and it was a big enough hit that it spawned not one, but two, wrestling ripof...err, tributes, in the summer and fall. In Canada, rookie Leo Burke wrestled as the Batman for Grand Prix and Stampede. In Florida, the Batman was portrayed by Howard Martin, who was better known in wrestling circles as Pepper Martin. He came to Amarillo for the first and only time in September from the Pacific Northwest, and left in late November to return to Portland. The "real" Batman, Adam West, made an infamous appearance on WMC-TV in Memphis in 1976 to verbally spar with Jerry Lawler.

Dan Miller - Like Perez, Miller had two stints in the territory during the calendar year. After leaving in July, he spent two and a half months in Australia, with a stopover in Hawaii before returning here in late October.

Dick Steinborn - Dick was the son of Orlando wrestling promoter Henry "Milo" Steinborn. Milo was one of the great weightlifters/strongmen of his era, once squatting 553 pounds without the aid of a squat rack (google "Steinborn squat" if you're curious how he would get the weight onto his back). Dick was no slouch himself, having a 30+ year career in wrestling that included time behind the scenes as a booker and promoter. In Georgia he wrestled as Dickie Gunkel, the brother of Ray Gunkel in storyline. Dick was one of the many Georgia wrestlers who went with Ann Gunkel's All-South promotion in November 1972. Dick came here in late October after wrestling in Florida.

Jerry London - London had been wrestling in Mexico in the summer and fall, and came here for his third (and final) stint in Amarillo at the end of October. He stayed through mid-December, at which point he went to Tri-State.

K.O. Yates - Yates was mostly known as Ken (or Kenny) Yates throughout his career, but used the K.O. name here in two brief stints. He came here from Dallas in mid November and stayed for just under a month. After leaving here, his name shows up sporadically in the AWA and Nebraska in 1967, and he would wrestle a handful of matches per year through 1972.

Wildman Weeba - In other places around this time, his last name was spelled Wehba, but most newspaper ads in this territory used the Weeba spelling. He had been wrestling for a couple of years at this point, coming here in October from Central States. After a month, he went to Dallas, where Fritz Von Erich suggested he change his name to sound "more Arabic". And thus, Skandor (spelled Skandar at times) Akbar was born.

Gary Hart - Gary left Amarillo at the end of October and went to Dallas, where he initially managed Karl Von Brauner & Al Costello.

Jack Cain was back as a manager towards the end of the year, managing Killer Karl Kox on some shows.

Other wrestlers with bookings here during the time period include Battleship Johnson, Benny Matta, the Black Raider, Bob Boyer, rookie Bobby Duncum, Chuck Karbo, Jet Monroe (Sputnik's brother), Johnny Zenda (billed as Canadian champion), Tuffy Truesdale (if you know who Tuffy is, then you'll know one of the special attractions I'll be mentioning below) and the Viking.

Women wrestlers with more than one booking during the time period were Betty Niccoli, Jean Antone, Kay Noble, Peggy Allen and Verne Bottoms. The five competed in all-women battle royals in most towns for a week in October.

Midget wrestlers Irish Jackie, Little Brutus and Bull Brummell finished up their 2 week stint here in October, and Cowboy Bradley, Fuzzy Cupid, Little Beaver and Sky Low Low were all here for a week at the end of October.

Victor the Wrestling Bear appeared for a week in December. He appeared in a battle royal most nights he was here. Victor's handler was Tuffy Truesdale, which explains Tuffy's appearances here.

The final Amarillo card of the year featured a match between two former NWA World Heavyweight champions, with the winner to get a shot at then-champ Gene Kiniski in Amarillo three weeks later on January 5th. Lou Thesz defeated Pat O'Connor to earn the shot, though it should be noted that while Kiniski was here on that January 5th card, he was advertised in a six-man tag and Thesz was not booked on the card. Thesz did face Kiniski the following night in St. Louis. Back to Amarillo, the semi-main event in the newspaper ad below did not take place. Steinborn actually defended the promotion's North American title against Dory Funk, Jr. instead of Ricky Romero. The day of the show, a newspaper article claimed that Dory "gave Romero his share of the purse" to take his place in the title match. Romero was booked in Corpus Christi against Fritz Von Erich. Also advertised on the card was Terry Funk & Dan Miller vs. Professor Tanaka & Killer Karl Kox and Dory Funk, Sr. vs Johnny Zenda. The Dory Jr. vs. Alex Perez match listed in the ad did not take place.